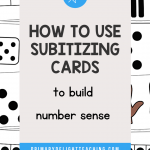 You roll a die, look at the dots, and instantly know that you rolled 5. When glancing at the plate of cookies, you quickly know there are 2 left. Looking at your stack of library books, you can immediately tell that there are 4 books in the stack. In all of these situations you are subitizing.

Subitizing is the ability to rapidly recognize how many objects in a group. In each of the examples above, you did not stop to count the objects; you could tell the quantity just by looking at them. That is subitizing. (I share a more detailed definition in this blog post about subitizing games.)

Why is subitizing important?

Students who are able to subitize have a stronger understanding of numbers. This foundation supports their ability to add and subtract in flexible ways. I also explain the importance of subitizing in the post about subitizing games.

What are subitizing cards?

Subitizing cards are flashcards with groups of objects on them. Teachers quickly and briefly show the cards in front of the class. Students respond with the number of objects they saw. For numbers to 5, students learn to instantly recognize the quantity (perceptual subitizing.) Check out this basic set of cards in my store, if you don’t want to make your own.

With numbers larger than 5, students typically see two subgroups of objects. Then they quickly combine the two subgroups to recognize the total number. For instance, when seeing 6 dots on a die, children might see two rows of 3, and recognize that 3 and 3 is 6. (Or they may see the first 3, then count up the remaining dots.) Subitizing cards with larger quantities help students learn conceptual subitizing, which is clearly connected to adding and subtracting.

Dot patterns are frequently used on subitizing cards. But it is also common to show ten-frames (or five-frames.) Sometimes other objects are also used (such as tally marks, fingers, or groups of items like pumpkins.)

You can also create your own subitizing cards using paper plates and dot stickers. Arrange the stickers in patterns like those on dice, as well as more unique arrangements that challenge student thinking.

If you don’t have time to create your own subitizing cards, check out this set in my store. They include dot patterns, ten frames, finger patterns, domino dot patterns, and tally marks.

How do you use subitizing cards?

Teachers frequently use subitizing cards as flashcards, as a daily math routine or as part of a math talk. These cards can be used in several different ways:

This is the simplest use of subitizing cards. As described above, briefly show the flashcard to the class. Then quickly lay it down. With beginning mathematicians, you might need to hold the card up for 2-3 seconds. As they become more familiar with the task and the groups, show the card for shorter time. The important thing is that you show it briefly enough that children are not counting the dots (or objects), but rather recognizing the quantity automatically.

With larger numbers (typically above 5 or 6), engage students in a conversation about how they knew how many dots there were (without counting.) For instance, with the card below, one student might have noticed 4 dots on top then counted up (5, 6, 7) for the 3 dots on the bottom. Another child might have noticed the dot arrangement for 6 (2 rows of 3) and added one more. Students can recognize multiples ways to find the number; the important thing is that they are learning to create subgroups with the dots, and using those subgroups to find the totally number quickly.

Instead of having students say the quantity they see, you could also have them write the number on a white board after you put the card back down. This keeps responses private and allows you to check on individuals. But, this slows down the number of cards you can display in a day; so you might decide to do this only from time to time.

One More, One Less

Once students are familiar with subitizing, you can ask them do do an additional task with the dots, such as add to or subtract from that number. For instance, with the card above, you might ask students to tell you the number that is

Obviously, it makes sense to start with one more and one less. As students become more familiar with a number grid (and taking hops up and down to quickly add or subtract 10), asking students to name ten more or ten less than a given number becomes more appropriate.

Ten frames are more supportive for this task than dot cards. The ten frame gives students blank spaces to get to 10. These would be helpful when introducing the task; then switch to dot cards for added challenge.

What else can you do with subitizing cards?

Instead of displaying cute pictures on your classroom number cards, represent each number with a dot pattern or ten frame. This gives students more opportunities to see the number patterns throughout the day.

You could replace the numeral cards in your monthly calendar display with subitizing cards. Then at calendar time, students would see how the date is represented with ten frames or tally marks.

You can show this in a few different ways:

One of my students’ favorite classroom games is Subitizing War. It is played like the traditional War card game, only the cards have number representations instead of numerals on them. Kids have so much fun, they don’t even realize they are practicing math skills!

At the beginning of the year (or with younger students), you might start with the more basic ten-frame war.

You can also use the cards from subitizing games to play other basic childhood games, such as Go Fish, or Memory. Vary the difficulty level of the game by starting with smaller numbers or making it challenging with numbers over ten.

Give students one card for each number. Students quickly put the cards in order from smallest to largest. Remind students to rapidly recognize the quantity, rather than counting each item.

Create decks of cards using various representations of a number (dots, ten frames, finger patterns, etc.) Students sort the cards by quantity, for instance, putting all the cards that show 7 in one pile or row.

If you are just getting started with subitizing cards, you might start with whole group work using the Flash It (Quick Images) routine. As students become familiar with the routines, you can add some of the variations to the routine. Then you can begin to incorporate some of the other number sense routines into the day. Using these math routines will help your students develop a solid foundation in number sense and a future of math success.