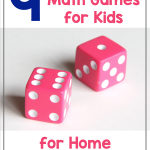 Learn about fun and simple math games for kids in school and at home.

I am a huge game nut! As a child I spent countless hours playing board games and card games with my family. At the time, I thought it was just a great way to pass the time. As soon as we declared we were “bored” my mom was ready with a new list of chores. Turns out that 3 hour game of Monopoly wasn’t so bad after all!

Little did I know that while I was playing games, I was actually learning math skills (and problem solving skills) at the same time. That’s why, as a teacher, I love using games in my classroom, especially during math time. It’s a great way to practice math skills without realizing that you are learning.

So, what are some simple games for kids to play in the classroom (or at home) to reinforce math skills? Here are a few cheap and easy math games with cards and dice – complete with variations to practice additional skills.

The first several games can be played with a simple deck of playing cards.

Go Fish is the classic card matching game where you deal out 5-7 cards per player, then place the rest of the cards in a “lake” or “ocean.” Players take turns asking for cards or being told to “go fish” until all the cards have been matched.

Math Skills Involved: The traditional Go Fish game uses a deck of cards, so kids can practice recognizing numbers to 10 with this math game.

Memory is a classic matching game where several pairs of cards are placed face down on a table (in mixed up order). Players turn over two cards at a time, looking for matches. It is best to use only part of a deck of cards to keep the game manageable. You’ll need to sort out pairs before playing.

War is another classic game – and it’s easy to adapt it to create fun and simple math games for kids of any age (check out the variations below).

Players each have a deck of cards (or split a deck of cards evenly.) They stack their cards face down, then each player turns over one cards at a time. The player with the largest number gets both cards. If there is a tie, players each adds two more cards (one face down and one face up.) The player with the largest number on the new cards gets all 6 cards.

Math Skills Involved: This is a great game for comparing numbers.

Play this game like Headbanz. The first player chooses a playing card and holds it up to his or her forehead without looking at it. (For younger players, the number can be taped to their back instead.) Player 1 asks yes-no questions about the number, trying to figure out what it is. For example: Is it an even number? Is it more than 10? To make the game competitive, you can limit the number of questions or see how many numbers the player can identify in one minute.

Math Skills Involved: This math game goes beyond simple number recognition and really works on number sense skills. Kids can practice things like odd/even and greater than/less than with this game, based on the clues given or questions asked.

If you have some dice laying around your house, your kids can use those to for other fun math-related games .

This is a new twist on the card game War. Instead of using playing cards, players roll two dice and add the dots. The player with the highest number gets a point.

Math Skills Involved: This game allow players to practice subitizing and addition at the same time. (Learn more about subitizing in this post.) If you use tally marks to keep track of the score, they can practice one more math skill while having fun!

This game is another family favorite. I remember when I was first big enough to sit at the table and play “dice” with the grown ups. I didn’t fully understand the strategy at first, but it sure was fun shaking the dice. However, I quickly learned which dice were valuable and the grown ups coached me about when to roll and when to stop.

Farkle is a simple dice game. To play, you need six dice. Players roll the dice and collect 5s, 10s, and groups of matching dice to score points. Although you can get purchase the game with a fancy storage cup, you can also play it with six dice (from any game or collection.) This is one of those simple math games that kids of all ages love!

Math Skills Involved: This game builds a particular number sense skill called “subitizing.” This is the ability to recognize how many are in a group without having to count. Players quickly learn the pattern that represents 5 on the dice.

You keep score on a sheet of paper. Older children can be given the task of score keeping, even for a short part of the game. Points are gained in increments of 50, so it’s not overly complex.

You will need to purchase the following games. However, they are typically inexpensive (less than $10) and are highly engaging for family members of all ages.

Games You Can Buy

Bingo isn’t just for grannies. This is one of those games kids and adults can play – while practicing math skills! The traditional Bingo game uses numbers from 1-75, with numbers arranged in columns under the letters B-I-N-G-O.

Math Skills Involved: Bingo is a fun way to practice number recognition to 75. (But several variations can practice other math skills, as well.)

Skipbo is a commercial card game where players build stacks of numbers from 1-12. The game also includes Wild cards (known as “Skipbo” cards) for added fun. This game has been a family favorite for my extended family for YEARS! In fact, it was one of my grandma’s favorite games, when I was growing up.

Math Skills Involved: Players not only practice number recognition to 12, but they also practice sequencing the numbers to create the stacks.

Sometimes you can find a kids’ version called Skipbo Junior. The overall game is similar, but the rules for the player’s hand are simplified, making it easier for younger children.

This last game is a little more expensive than the others (around $20). But it’s an engaging way of turning flashcards into a game.

Math Skills Involved: This game practices addition and subtraction facts with numbers up to 30.

As you find yourself hanging out at home (whether it’s because of a rainy day, snow storm, or the pandemic), consider playing some of these simple math games with your children. They will be able to practice math skills without even realizing it! Plus, you will be creating fun family memories as you play.

All of these games also work well in a classroom setting. Kids can play in pairs or small groups. Just don’t tell them they are practicing math while they play!

2 thoughts on “9 Simple But Fun Math Games for Kids”