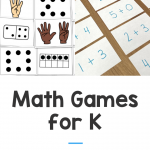 I love using number games for kindergarten learners! They are a great way to practice math skills in a fun and engaging manner. I’m lucky that my district’s math curriculum incorporates quite a few number games in the daily lessons.

Once my students have learned how to play a number game, I use that same game repeatedly in my room. First, we use it as a “sponge activity” during math – students who finish early can play the game with a partner. Then, when I see that students can play the game independently, I add it to a math station. But my favorite part is when students ask if they can play the game during choice time or when their morning jobs are done! That is the BEST feeling because not only are they having fun, but they are learning, too. And I strongly feel that learning should be fun!

How can you use games to spice up math practice?

To answer this question, first think about the math skills your students should develop. Some common kindergarten math expectations include:

Then start thinking about how to support these skills with fun math activities for kindergarten.

So, what are some good number games for kindergarten?

When planning number games, simplicity is often the best plan. You might find it easiest to choose a few game formats that can be re-used to practice different content. For instance, you might use multiple versions of memory or war games throughout the year.

These game structures use few materials and are pretty easy to create. Plus, you will save so much time and energy explaining directions, because the kids will already know the basics of how to play the game.

Here are some examples of simple number games for kindergarten:

This activity is best for students who are just learning to recognize numbers. Choose your target numbers (maybe 1-5). Use index cards and write a number on each index card. You can cut them in half to save resources. You’ll want at least 4-5 of each number. Students can sort the cards to find the numbers that look the same.

Help students practice number sense and subitizing by sorting ten frames, dot patterns and more. Use index cards with numerals to use as headings for the sorts. Then print or label or sticker other index cards with ten frames, dot patterns, dominoes, sets of stickers, etc. Or, simplify the process with these pre-made subitizing cards that can be easily printed and used for sorting.

Use these subitizing cards for students to sort cards by their value.

Later in the year, you can use this same game structure to practice addition facts. Once again, create sort headings by writing numbers on index cards. Then create sorting cards by writing various addition facts on more cards. Include multiple facts with the same sum. For instance, you could include 2+3, 1:4-, 5+0, 4+1, etc. Students will sort the addition facts by their sum (answer.)

Memory (or matching) games are fun number games for kindergarten. They are easy to play and easy to create. Plus, you can use them to practice a wide variety of number skills.

Just like the sorts above, use index cards (cut in half, if you want) to make the game. Or create printable versions by making a table in a word processing document and putting numbers in the boxes.  You can make a number of variations of memory games to last all year.

The traditional War game is another game that allows a number of variations. In addition to practicing number and counting skills, students also need to compare numbers for this game.

Use the basic rules of “War” for any of these games. Each student turns over a card. Students compare their numbers (or representations of numbers) and the player with the greater number takes both cards. If there is a tie, each student turns over 3 more cards (or simplify it with only turning over one more card.) The winner of the tie-breaker takes all the cards. Under normal “War” rules, play continues until someone runs out of cards. But under classroom rules, play continues until time runs out. The winner is the player with the most cards at that point.

Number War – Use cards from a deck of playing cards or homemade cards with numbers (or these printable cards). When students play, they practice recognizing and comparing numbers.

Ten Frame War – Use this FREE printable game to build skills with ten-frames. Instead of comparing numbers, students compare ten-frames.

Domino War (with actual dominoes – or printable cards) – Students compare the total number of dots on the dominoes to determine who wins each round. You can also use this version to practice beginning addition skills.

Use a pair of dice to create more number games. All of these games can be played with one standard die, a pair of dice, or the fancy polyhedron dice (with more than six sides).

Students roll 1-2 dice, then cover or color the corresponding number on the board. This can be a single player game (see how fast you can cover your board) or a competitive game (see who can cover their board first.)

Write the numbers 1-6 on the bottom of graph paper. Roll a die and color the box above the corresponding number.  To work with larger numbers, you can also write 2-12 and use 2 dice.

Each player rolls a die and announces their number. The player with the greatest number takes a penny or counter to keep track of the score. Turn this into an addition war game by using two dice. Encourage students to say the number on the die with the most dots, then “count on” using the dots to find the total.

Turning math practice into a game makes it more enjoyable for students. And when they are having fun, they are more willing to practice these math skills, creating a winning situation for everyone involved! Try a few of these math games in your classroom this week. Pin this post to refer to later.

Feel free to share your favorite math games for kids in the comments. I’m always excited to learn about more simple math games my students can use!